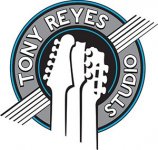 Tony started playing guitar at the age of 14. At age 18 he relocated to Minneapolis, Minnesota to attend Music Tech of Minneapolis. Through the years he has played throughout the upper midwest and most currently in the Ark-La-Tex area, With his band, SUPERUNKNOWN. Tony teaches all styles of Rock, Metal, Blues, Progressive, Latin Rock and Classical.

Inducted into the Louisiana Musician Hall of Fame in 2002, Jimi has been playing and teaching since the 1960s. Known across the country with bands like The Peermonts, Jimi has had a recording career on both sides of the mixing board, working with stars such as James Burton, Joe Osborne, Ry Cooder, Big Al Downing, David Houston ,Danny Johnson, Micheal Garvin, Percy Sledge, Tilman Franks, Keith Caradine, The Drifters, and Buck Owens. His guitar can be heard in such movies as Steel Magnolias, Creature from Black Lake, and Southern Comfort. Jimi's seen it, done it, and taught it.